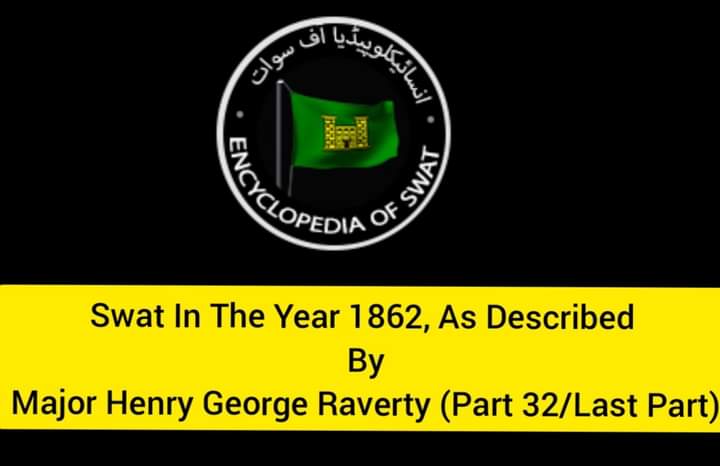 Major Henry George Raverty’s brief work with the title, ‘An account of Upper and Lower Suwat, and the Kohistan, to the source of the Suwat River; with an account of the tribes inhabiting those valleys’  was published in the Journal of the Asiatic Society of Bengal  (Volume XXXI, No.I. To V. 1862) Calcutta in the year 1862.  That work of Major Raverty is produced here on this website for the interest of the readers and research scholars. Raverty wrote: (PART 31/LAST PART)

The following lines are taken from a long poem in the Pushto language, which I have referred to previously, by the renowned chief of the Khattaks, Khushhal Khan, who wrote from personal observation. It will be seen that Suwat has not much altered since his day. The translation is literal.

“In the Emperor Shah Jahan’s days, I was in my youth;

And every thing to delight the heart was easy to obtain.

Sarae from Suwat is distant about thirty coss,

By the time thou descendest as far as the river and hills thereof.

For three things Suwat was in my memory impressed,

In respect to which, all others were as air unto me.

One, indeed, was this, that I had matrimonial matters in hand ;

The other was its narcissus gardens; the third its field-sports.

I was in the Emperor’s employ ; the Yusufzis were unto him

Hence it was a matter of difficulty, my going into Suwat.

Malu Khan had arranged the bridal affairs according to my wishes;

And in his house, the mother of Sadr I was married unto.

But whether ’twas to see its narcissuses or enjoy its sports,

We look back, in old age, the Almighty’s favours upon.

The whole of it from beginning to end I brought under my feet:

I became acquainted with Suwat’s every nook and comer.

Suwat is intended to give sovereigns gladness and joy;

But now, in the time of the Yusufzis, ’t is a desolate hostel.

On the north it is bounded by the Bilauristan mountains ;

To the east lies Kashmir: to the west Kabul and Badakhshan.

Towards Hindustan it has black mountains, and frowning Passes;

In the ascent of which, armies will get entangled, and confusions ensue.

Its climate, in summer, is far superior to that of Kabul:

The climate of Kabul is bleak ; but that is genial and mild.

Indeed, it resembles Kashmir in air and in verdure;

But alas! Kashmir is extended, and Suwat is confined.

The valley, in length, is just thirty coss, at the utmost:

Its breadth is about one or two, sometimes more or less.

Its river flows in a direction from east to west;

As to its straightness or crookedness, say naught to the scribe.

Through every village and house thereof a rivulet runs:

They consume the grain produced, and they export it also.

It has no road thro’; no other occupation; no other profit:

In truth, ’tis a granary wholly detached from the world.

At times the cheapness there is so excessive, ’tis said,

That for two farthings twenty guests can be entertained!

It hath cool water from springs, and from snow also:

In Suwat there is neither simum wind, nor is there dust.

Every place throughout Suwat, is befitting a prince;

But without either chief or ruler, ’tis a mere bullock’s pen.

Kings have, in it, found both pleasure and delight ;

But the present people are not gifted in such like arts.

There are large and lofty eupolas, and idol temples also:

Large forts there are, and mansions of times gone by.

It is a garden of fruits, and a parterre of flowers;

And lit for a king, in the sweet summer time.

In Suwat there are two things more choice than the rest—

These are, rosy-cheeked maidens, and falcons of noble breed.

Wherever, in Suwat, there is a dwelling in repair,

In every room thereof, rosy-faced damsels will be found.

Altho’ the whole country is suitable for gardens,

The Yusufzi’s have made it like unto a desert wild.

In every house of it there are cascades and fountains ;

There are fine towns; fine dwellings, and fine markets too.

Such a country—with such a climate—and such streams,

It hath no homes, no gardens, nothing fragrant or fresh.

They gamble away the country yearly, drawing lots;

Without an invading army they ravage themselves.

The Yusufzis keep their houses dirty, and untidy too :

Their dwellings are polluted, filthy, full of bad smells.

If there may be panjars, fleas, and mosquitoes in Suwat ;

Who shall give an account of the brorrahs and bugs ?

I got fever twice from the effects of these brorrahs.

I was covered with pimples from the rash caused by their bites.

In every house there are as many dogs as human beings ;

And in their court-yards, fowls in hundreds strut about.

Every place inside is blocked up with jars for grain :

In grossness of living, Suwatis are worse than Hindus.

The Bai-zis subsist in a manner worthy of them ;

And the Khwado-zis are chandlers and naught besides.

They could take, every year, two or three hundred falcons,

Were their customs and their ways like that of the Kafirs unto.

Although other game in Suwat is plentiful enough ;

There is still more of clikor in every direction.

There are wildfowl, from one end of the river to the other;

And the rascals’ matchlocks are always in uproar on them.

There are mountain goats, wild sheep, and tiny-footed deer;

But the matchlock men, alas ! drive them all away.

Since there is so much country included in Suwat.

It is more than the appanage of a single chief.

The boundary of Chitral is quite close unto Suwat:

Populated and prosperous are its hills and its dales.

The road into Chitral lieth through its Kohistan.

A caravan can reach there in the space of five days.

For three or four months this road is good and open;

But, afterwards, hath great dangers from snow and rain.

This road however is not, by travellers, for traffic much used ;

But trade is carried on by convoy, through the more level tracts.

There is a road leading to Turkistan by Hindu-koh ;

And another, that leads to Chitral and Badakhshan.

Another road also that leads to Butan and Kashghar;

And one more, that goes to Morang, up hill and down dale.

All these lie on the extreme bounds of Hindustan ;

And there are other routes on the confines of Khurasan.

The Yusufzis in numbers are beyond all compute ;

But they are all asses and oxen nevertheless.”

On some future occasion, I propose giving a few extracts from the history of the conquest of Suwat, out of the work written by Shaykli Mali, and the book referred to at page 261.

‘An account of Upper and Lower Suwat, and the Kohistan, to the source of the Suwat River; with an account of the tribes inhabiting those valleys’  was published in the Journal of the Asiatic Society of Bengal (Volume XXXI, No.I. To V. 1862) Calcutta, pages 278-281. 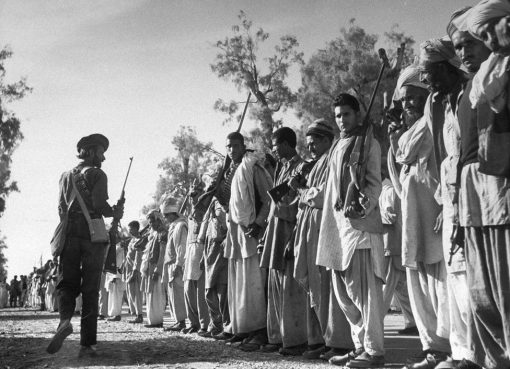 Those officers and ranks of the law enforcing agencies, who laid their lives in war on terror are honoured in all possible way. Their families received 'Shaheed' packages. In some cases, their service
Read More 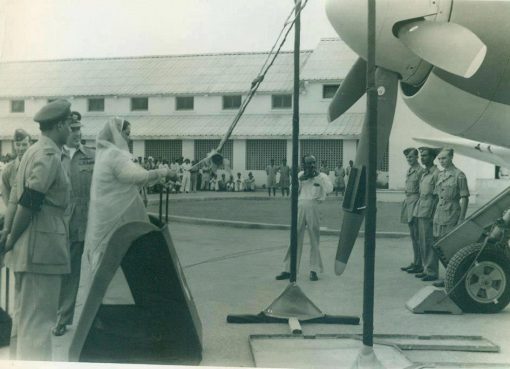 The formation of Swat state is a unique event in the history of Indian Sub-continent in general and the North West of India in particular. Interestingly, the former Swat state was formed through a soc
Read More